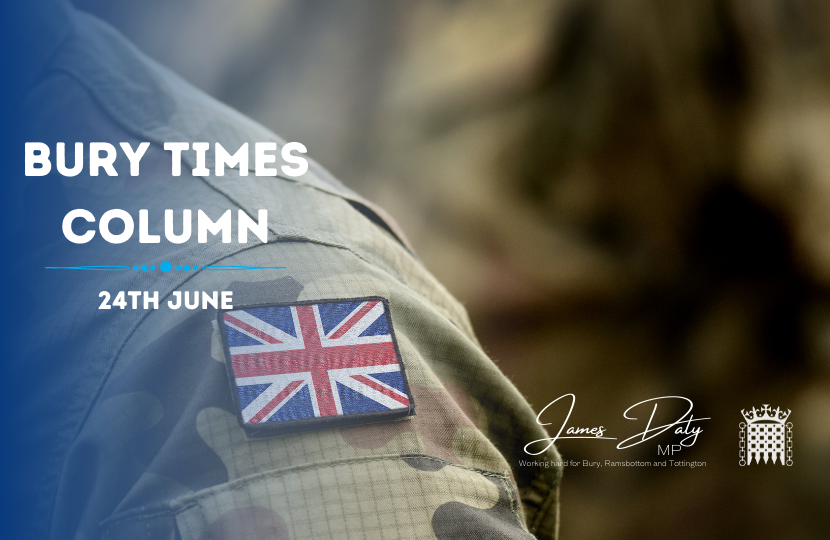 Private William Hickson lived at 33 Bye Road in Shuttleworth. Having served in the armed forces during the Boer War, like many others from Bury, Ramsbottom and Tottington, he enlisted in the Lancashire Fusiliers following the declaration of war in 1914.

An incredibly brave man, he made the ultimate sacrifice for his country, being killed during the Gallipoli campaign in June 1915. He left a wife and four children.

The memory of William and the thousands of other armed forces personnel from our area, who each have their own unique story of valour, are a crucial part of our collective histories and we will never forget. Our towns are incredibly proud that this history of service continues with men and women, born and bred in Bury continuing this proud tradition by serving in the army, navy and RAF today.

This is why we should all lend our support to Armed Forces Day on Saturday. It is an opportunity to thank the forces community, from serving troops, to service families, reservists, veterans and cadets, who all contribute so much to our community and are playing an integral part in the fight against Covid-19 in Greater Manchester. It is also great news the Fusiliers Museum in Bury will reopen on Armed Forces Day and we are lucky to have such a wonderful facility we can all visit.

But we must use Armed Forces Day as the catalyst to improve our offer to veterans locally, building on the work of many groups and individuals. I have been involved in discussions with Bury Council as to how we can bring a multi-purpose veterans hub to Bury, ensuring those who have served have access to bespoke services and support seven days a week. This model has been successfully developed in towns like Wigan and politicians must work together to make this a reality here. I am delighted following a recent meeting with the Armed Forces Minister that he has thrown his support behind the project also.

Nationally, I am pleased the Government has introduced the Armed Forces Bill, which will enshrine the Armed Forces Covenant in law and help prevent service personnel and veterans being disadvantaged when accessing healthcare, education and housing. More must be done though to protect soldiers from historic vexatious prosecutions, such as the recent cases dismissed by the courts in Northern Ireland.