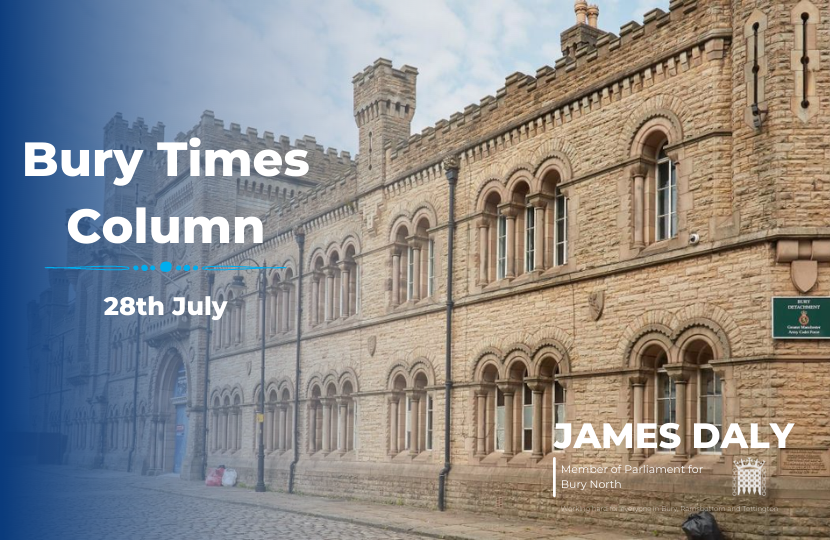 In 1469 Thomas Pilkington received a “licence to crenellate” from the king, which gave him permission to fortify his manor house. He built the structure we know today as Bury Castle.

However, history would not be kind to Thomas. On August 22nd 1485 he fought in the last battle of the War of the Roses at Bosworth Field. Due to his support for the defeated Yorkist King, Richard III Thomas was stripped of his lands and the order was given to raise Bury Castle to the ground. Fifty years later the castle was described as a ruin.

In 1865 workmen were digging in the Castlecroft area of Bury to lay a new sewer. Their trenches revealed the buried walls of the castle. The Castle Armoury was built over the remains three years later for the 8th Lancashire Rifle Volunteers, and its sitting and crenellations are clearly in tribute to the original castle.

It was therefore with great sadness that I read confirmation of the decision to close the historic Grade II-listed Army drill Hall on safety grounds at the beginning of this month.

Quite rightly, local councillors from all parties have joined together to express their desire for the building to remain open and have therefore called on the Government to meet the estimated £2 million of investment it will take for immediate repairs to be carried out, but the cost for a full renovation could be as high as £10-12 million.

I often talk in my column about how preserving our history and heritage can be a catalyst to local regeneration and creating opportunities for all, whether that be through employment, training or other means. This applies equally to Gigg Lane, the East Lancs Railway, The Co-op Theatre in Ramsbottom and other local landmarks.

Last week I met Jeremy Quinn MP, Minister for Defence Procurement to discuss our town’s options in the fight to save the Castle Armoury for all those in the cadet force, army reserve, veterans and other groups and individuals who have worked tirelessly to preserve this fantastic building.

It is my view that we as a community must all play our part in creating a plan to secure the future of the site and make the most of this architectural gem. The MOD is facing grave pressures on its budget to maintain defence infrastructure, however, if all politicians and stakeholders can come together to ensure the building has the widest possible use whilst being central to our town’s military identity and local capability we will be doing justice to 553 years of our town’s history.

This is a different battle from that fought by Thomas at Bosworth, it is the ongoing campaign to level up and preserve all that is unique about the town of Bury. Striving for a better future, whilst celebrating our past.

Securing further investment in our cultural and sporting facilities

We need to make sure that our area has its fair share of investment nationally, regionally and locally to support important cultural assets.

Stay up to date on local issues