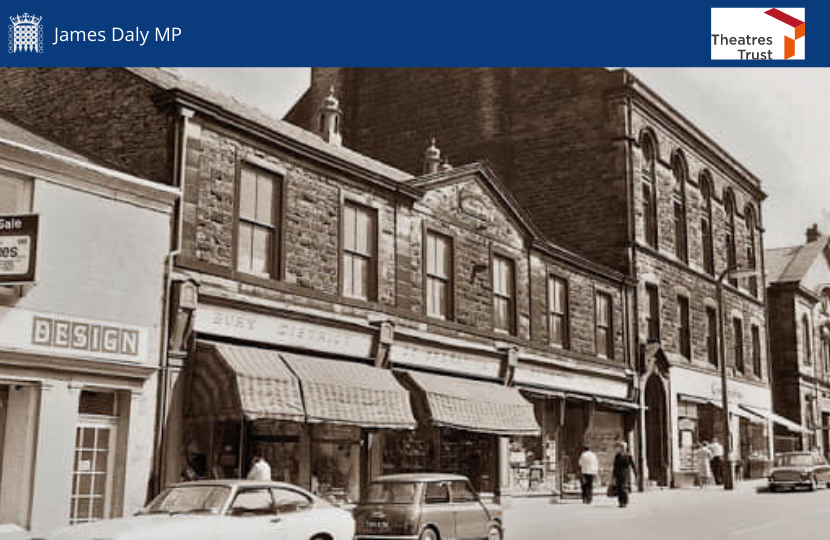 This fantastic historic and cultural building has officially been made a grade two listed building. This is a huge step for its preservation and opens up exciting opportunities for potentially reopening the building as a key cultural asset for our area.

I will be contacting the owners of this building and coordinating with local people and cultural organisations to look into this project.

I have met today (9th February) with the Theatres Trust team about the Ramsbottom Co-op Music Hall. This is a beautiful building that has the potential to be a fantastic community asset and I am going to be working with Theatres Trust in their efforts to make this a protected site. This will then give us the opportunity to pursue the purchase of the building for it to be refurbished and brought back to its former glory. I will be seeking a meeting with the current owners to establish what can be done going forward and looking at the funding that is available from a variety of organisations to begin the refurbishment.

Tomorrow I am meeting with Historic England and urging them to make this a permanently protected site.

History of the site.

The Ramsbottom Co-op Hall was built in 1876 when the Ramsbottom Industrial and Provident Society built a three-storey extension alongside its existing 1863 building. The new extension was constructed to house shops on the ground floor with offices, stores and a music hall above. Seating 800 people, it was the chief theatrical and social venue in the town.

Designed at a point when music halls were steadily moving away from the ‘supper room and promenade’ style with an open concert platform to a more theatrical configuration, the Co-op Hall contained a gallery around three sides with the fourth side containing the stage area with portable proscenium and scenery. The gallery together with decorative ironwork supporting columns still exists, as do the upper columns and hammer beams carrying the basket-arched roof trusses and original boarded ceiling complete with ornate cast-iron ventilator sunburners.

The hall was originally used for variety entertainment of the kind commonly associated with music halls of the period as well as lectures, guild meetings, temperance services and grand concerts. During the 1920s the hall was used by travelling theatre groups and players. The Co-operative Wholesale Society ran promotional films and smoking concerts in the 1930s. During World War II it was used as an army training centre and the seating removed, although the balcony level tiering still remains. In 1944 it was taken over by the Labour Exchange and has remained unused since.

Music halls were once numerous everywhere, but only a handful of those of the 1850 to 1880 period now remain. The Co-op Hall therefore represents a historically significant building type. It is also believed important in the history of the Co-op.

32% of Bury North residents given vaccine

James Daly has welcomed the latest figures showing 32 per cent of people in Bury North have now received a vaccine
In total, more than 19.3 million doses have been administered to over 18.6 million people across the United Kingdom – equivalent to 1 in 3 adults.