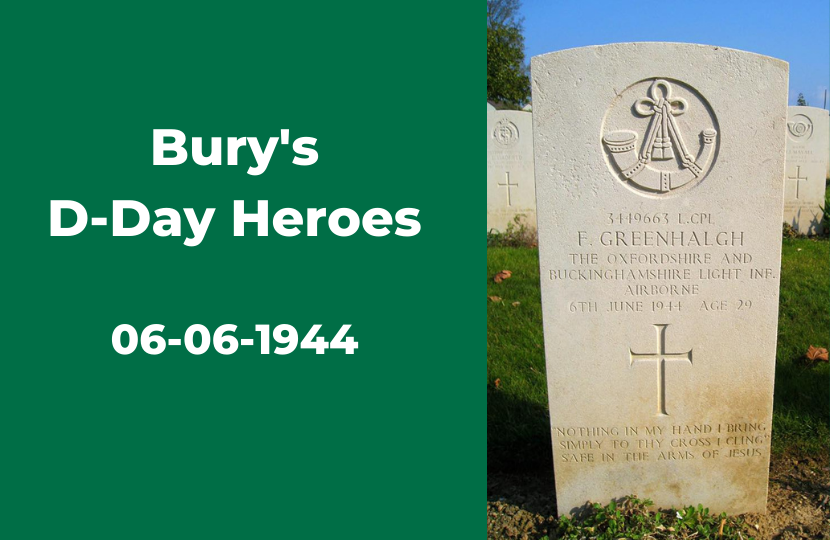 On the 6th of June 1944 Operation Overlord was launched, this is better known by many of us as DDay. A day which would see the deaths of 3,300 British military personnel and the biggest amphibious landing in history. Throughout the Second World War every community in the United Kingdom suffered the pain and loss of their young men, Bury, Ramsbottom & Tottington were no different.

Ahead of the anniversary of D-Day on Monday, I want to share with you the story of one of those men who lived here in Bury, Lance Corporal Fred Greenhalgh. Lance Corporal Greenhalgh was born on 12th of July 1914 to Sam & Lily Greenhalgh, he resided with his parents at Duckworth Fold in Bury. Although Duckworth Fold is no longer there, from historical maps we can see it was located off Bell Lane.

Lance Corporal Greenhalgh began his military service in the Lancashire Fusiliers before transferring to the Royal Welch Fusiliers and finally to the Oxfordshire & Buckinghamshire Light Infantry (2nd Airborne Bn.) on the 27th of July 1942.

At 12:16am on D-Day the first gliders landed into France as part of Operation Deadstick. The operation which was led by Major John Howard had the objective of taking Pegasus & Ranville Bridge ahead of the landing craft arriving onto the beaches of Normandy. Many people who have an interest in history will know of the operation, it took just 10 minutes to secure the bridge due to taking the German soldiers defending it by complete surprise.

Unfortunately, as the troops made their way over the bridge Lieutenant Den Brotheridge from Staffordshire became the first British soldier to be killed by enemy fire on D-Day. However, a largely forgotten part of this operation is some of the gliders landed off course and into a nearby pond. Aboard one of these gliders was Lance Corporal Fred Greenhalgh, who sadly under the weight of his equipment drowned shortly after the operation began.

As a result, Lance Corporal Greenhalgh became the first British soldier to lose his life on D-Day. He is buried at La Deliverande War Cemetery in Douvres, France. The inscription on his head stone reads ‘“Nothing in my hand I bring simply to thy cross I cling” safe in the arms of Jesus’. He was 29 years old.

As we commemorate the 76th anniversary of those landings this Monday, it is incumbent upon us all to remember the sacrifice of Lance Corporal Greenhalgh and indeed all those who paid the ultimate sacrifice.